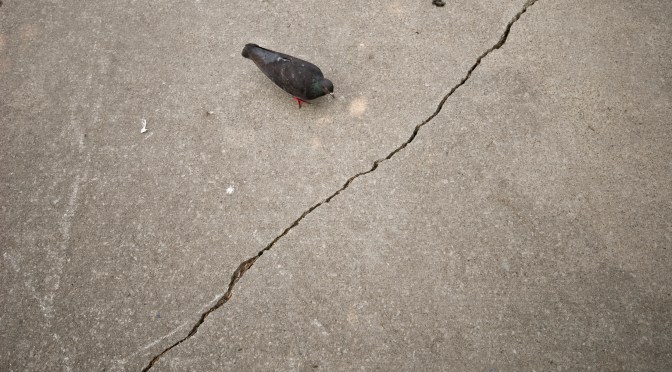 What travel writers fail to write about, but what every traveler to Rome quickly understands, is that the vitality of Rome is at street level, in the shops and alleys and plazas down below, not the arcing walls and commanding towers above. From the agrarian countryside of windblown trees, summerfallow fields and feeding doves, to the stone walls, tenements, and ancient shops of the city, the feeling of humanity – not the highbrow renaissance kind, but the hunkered down, feeding and slurping kind – permeates the land.

At such an early hour there were no people. I went to the dining patio, still pearly with dew and waking, and sat beside a fat, solitary pear dangling over the table. The furniture was plastic and artificial, the table cloth a gingham red; a wild, viney rose bush ran the length of the railing, sprouting and sprawling beyond a narrow planter. Two pigeons strutted on the concrete, their cooing displacing the silence.

“Si, you go there, if you like, to take breakfast.” Alberto, our front desk clerk with a wandering left eye instructed us in the hotel amenities when we arrived. “I can go early?” I asked. “Anytime. All the time.” He shrugged. “Is open always.”

The sun lifted and daylight fell down the canyon walls. A waitress appeared to prepare the tables for breakfast. At each table she placed white crockery – cups of varying sizes for coffee, milk and cereal. She set down wicker baskets of small jams and jellies and individual packages of Fette Biscottate. When Harumi tried dunking one of these in her coffee, it fell apart before it reached her mouth. The girl rolled out trolleys bearing cisterns of hot coffee, hot tea and hot milk. A final tray with a domed glass case she filled with fresh croissants, both plain and sweetened. She didn’t speak. She moved silently.

The city woke, and we went out into it. Along the streets, shutters were being rolled open and windows washed. It was Monday, so shelves got their weekly dusting and signs their makeover. Rome stopped being a pallid warehouse of coveted antiquity – as it appeared on every summer weekend – and started being a thriving city.

“Giorno,” they said. It was the sound of a swallow, or hiccup. I couldn’t tell if it was coming out or going in, but it was how these men – these grey-haired clerks, middle-aged with that Roman rotundity all men over forty seemed to develop – said hello. In the abbreviated morning greeting, they conferred casual respect and an comfortable awareness of their clientele, the way a fat uncle doesn’t get up when you enter the room, staying instead in front of the television, burping.

Customers came for the legs of ham as wide and deep as a lute, for wheels of cheese, for buckets of salamella piscante. They bought deep-fried, stuffed olives, frozen octopus and Speedy Pizza, “alla Four Margherita” inside. They came in their auntie dresses and reading glasses and bags of goods already filled at other stores, and they were served with direct and simple care. They were like family.

Outside, the square was dominated by a statue of the martyred, hooded and solemn-looking Giordeno Bruno. His execution, after a life of persecution and accusations of heresy, was a death by fire at the hands of 17th century inquisitors. The statue was his record. At its base was a fruit stand.

“Do you speak English?” A small, blond woman in her late-thirties approached me at the fruit stand. Another woman in front of me had just bought a monstrous cluster of green grapes. I was considering the single small vine remaining. I could wash them at the tap and gobble them up in one sitting. Before Harumi was finished with her picture taking.

“Yes,” I said. I lay the small cluster back in the box and waited for the clerk to look my way.

“You never touch things in an Italian market!” She said this with a pinched, urgent look on her face. Her hand sliced through the air as she finished.

“It doesn’t matter,” she said in her tight British accent. “Never.” She turned and walked quickly away.

Hers was the condescending need to educate. She’d likely been in Italy before, perhaps she was one of those British tax or weather exiles that warmer, cheaper European countries seem to attract. Like Canadians in Cancun. She was a fan of D.H. Lawrence, or Shelly and Keats, and she spoke Italian in the same pressed and clipped manner she spoke English. She knew Italy, and had a self-impressed fool’s maternalism over its customs. She saw an American (what else?) and needed to teach him a lesson.

Conversations ranged around us, between customers and clerks, between co-workers, between neighbors and neighboring shopkeepers… and of course we could understand none of it.

“Get your damn bike out of my way!”

“I’ll ride where I want. Move your blasted store.”

“Move my– why you pig-faced sodomite. You ride that thing back this way and I’ll–”

This might have been what they were saying, these three middle-aged, stubby shopkeepers in their white aprons, shapeless caps and open-collar shirts. Might have been, had they not ended the loud, sharp exchange – the hand-clenching, arm-waving, red-faced dialogue – with laughter and claps on each others’ back. The sun had crawled down the high apartment walls and hit the piazza floor. 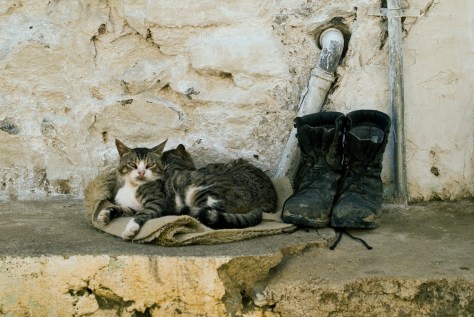 Italy, as any writer who’s been there can attest, is a dream location. Interesting locals, weird tourists, astounding buildings and cities, a history that befuddles the mind trying to comprehend its events…. I spent an insignificant amount of time in Rome, Naples and Pompeii, and from this cursory glance, wrote a series of stories.

At first glare Naples had nothing that was natural or organic, no subtlety. The only free movement was a shirt sleeve blowing in the wind. In the Quartier Pendino, a valley of grey apartments ran five blocks long and seven stories high. Blotting out the sunlight that fought its way down the narrow canyon was a tangle of tablecloths, towels, shirts, sheets, underwear and black-netted stockings, tied and strung across from building to building. A web of trapped insects straining to escape.