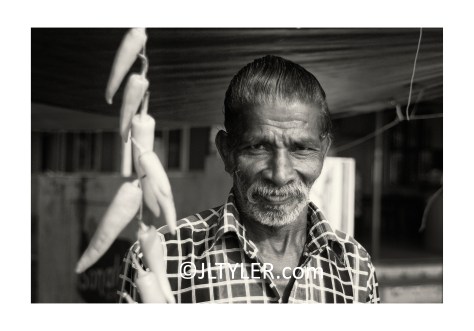 As I was building out this next round of portraits, I realized that was a lot of luck involved in capturing most of these. As I read more on portraiture, though, I see there are unifying elements that make a portrait a strong portrait, and some of these elements are caught in the photos below.

Any photography website or tutorial will tell you there are a few key techniques a photographer must consider when creating a portrait. The eyes of your subject, for example, need to be sharp and show life; some detail such as hair or clothing needs to be sharp and clear; the texture of the skin, depending on the look you want to achieve, needs to be smooth and well-lit (flattering modelesqe look) or coarse and gritty (real-life look); and the lighting needs to be flattering and emphasize whatever it is you want the viewer to focus on. If you have control over your subject, you can also use posing techniques, but my level of street photography doesn’t allow this. 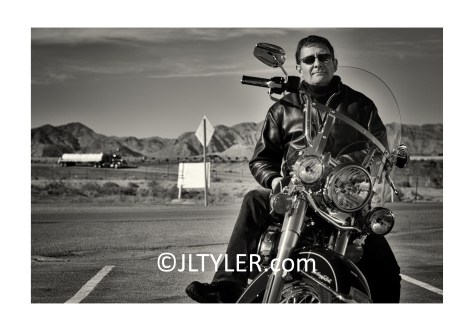 I’ve got a mixed bag of six portraits included in this post, and each of them relies on one or more of these details to make them appealing. The above two shots, the pepper vendor and the biker, don’t necessarily rely on eyes to make the shot; the pepper vendor is squinting and the biker is wearing shades. I think the critical element in both of them is texture and detail. You can see the texture in the pepper vendor’s forehead as well as in the well-oiled tracks of his hair (he had a cool top-knot in the back). With the biker, the texture of the leather is more dominant than his face, and that seems to underline the “biker” nature of the portrait. The fact that he just looks tres cool, and has a background detail of a manly eighteen-wheeler barreling in from camera left, is a bonus. 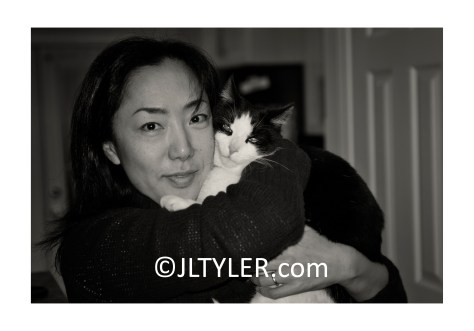 The next two photos, Woman with Cat and Two Sisters, both rely on eyes. The highlight of the former is, of course, the beautiful almond shape of her eyes framed by the elegant eyebrows, as well as the finer set of cat’s eyes ready for comparison on the right. There is also a liveliness in the woman’s eyes that seems enhanced by, or as a result of, the hug she is giving the cat. 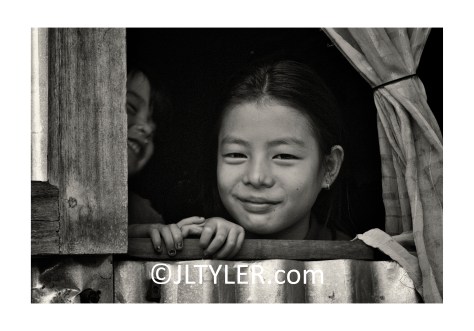 The Two Sisters on the other hand shows, in the older sister’s eyes and overall expression, pleasant bemusement, perhaps due to the photographer standing outside her window or by the antics of her younger sister playing in shadow. While her younger sister’s eyes are closed, the joyous child’s expression is no less winning. There is also much texture in this shot. The chipped nail polish  on her fingers gripping the window sill are a dainty counterpoint to the roughness of the wood and corrugated tin of the room’s exterior. The slight scratch on the older girl’s nose brings out her character as well, speaking to, perhaps, some rough-housing fun. 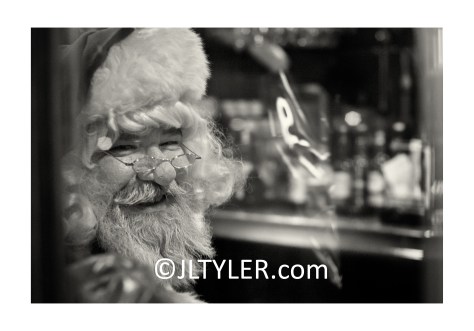 Santa in Bar and Man with Tuk-Tuk are the final two of this series. I think “detail” is the unifying element of these last two (along with the beards and fantastic, groomed moustaches of each of the men). Santa was actually sitting inside the bar, behind a heavy sheet of plastic to keep out the cold (you can see the warp of the material to the right); it is the detail of the plastic and the way it frames Santa’s face that make this shot interesting. 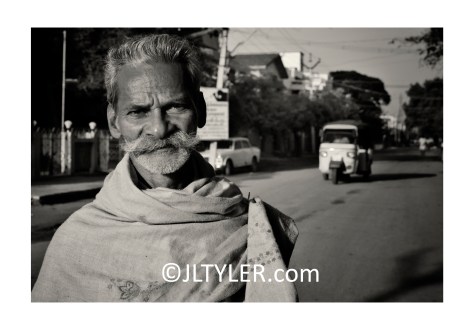 And finally the Man with Tuk-Tuk. Arguably there is too much going on in this shot; I might have blurred the background better (either in-camera or in Pshop) to defocus the detail and therefore focus on the man himself, but I really like the tuk-tuk approaching (you see them on any and every street in India), both for its intrinsic character and the receding depth it creates. The detail of the man himself, such as the fine needlepoint flower on his shawl, the wrapped shape of the shawl itself, and his forehead and pompadour hairstyle, all combine to create a solid street portrait of a seemingly interesting soul.