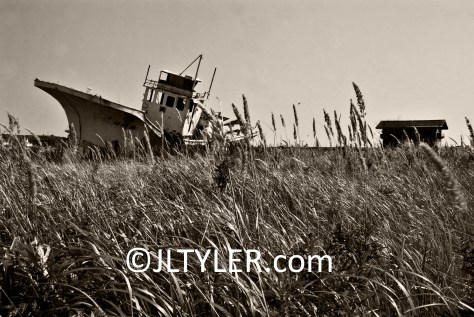 Japan is an island, and water is a large part of the culture. I’ve gone on many trips in-country, and was never far from the oceans and rivers and the people that live and thrive nearby. Fisherman are a recurring image in my photos, but the fish themselves are fewer and further between; they tend to show up frozen on a dock, with a gaggle of bidding buyers flailing above. Boats are represented as well, but are usually moored, their character somehow subdued. 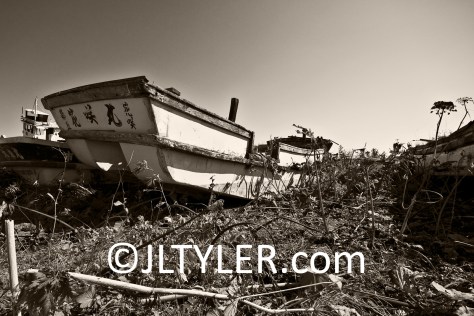 I came upon this boat graveyard in western Hokkaido. Sunk in a field of grass, in an out-of-the-way section of pier, lay a score of abandoned fishing boats. As I walked through the field and noticed the detail of broken mast, punctured hull, twisted netting and bows asunder, I realized these workhorses of the fishing trade had not lost their glory or their bearing. They were not subdued; in fact, they were very much full of expression. 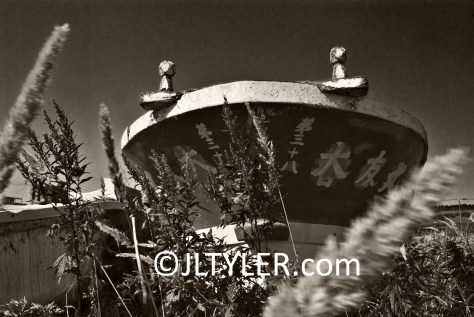 The smooth slope of hull is as graceful on land as it would have been at sea; you just feel it’s misplaced. The mooring posts still appear strong, as if they are wanting that corded rope to wrap itself around them again. The lines and characters of the names painted on each hull are smudged, faded, but they still feel as if they are providing identity. And the tilt of each boat is no less dignified for it occuring midst the waving grasses. There is still grace and beauty in this field. There is still voice.