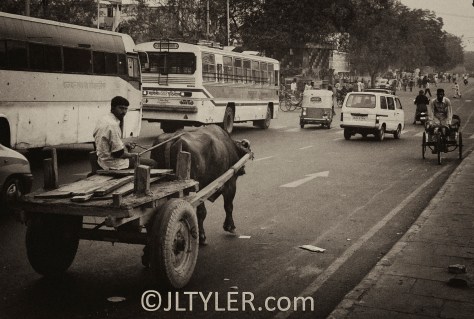 Kathmandu had shed its night, the dark that descended as I walked alongside the Royal Palace, the dark that brought out the gargantuan bats, the dark that hid broken sidewalks and breaking streets. But as I walked the sleepiness out of my system that first morning, the monochrome grey light at six AM showed nothing more than small carrion birds fighting with the garbage. The city moved barely a twitch. With no real light, it didn’t seem alive.

Then the sun rose and the color took over. Streetsweepers – mothers tending children – wore bright pinks and reds and greens while they swished filth from the center of the road, their saris more vivid for the browns and greys of this brick and rock city they were set against. Young boys with conical straw baskets tied to bicycles as old as dirt used shovels to scoop it up and cart it away. The women swatted and swept, clucking all the while with each other and to their toddlers, and never lost their feminine dignity in the process.

Schoolgirls traipsed up the road in twos and threes, their ochre saris contrasting with their Nepali faces. Perhaps it was less the Nepali-ness of their faces that clashed with the saris than the youth of them. Round, glowing faces they had, cheeks with a ducky flush, unbeguiling eyes – their faces were young but the dress ages old. A vendor parked outside the gates of their school sold pencils, erasers and limp notebook paper common all over the subcontinent.

The smaller streets came to life. Men brushed their teeth at open taps, children wandered sleepy-eyed out of cave-like doorways, women splashed small pots and tin cups in filthy buckets of slime. The shop clerks started their day, some by rolling up a shutter of steel and opening their storefront, others by squatting on the sidewalk and folding back the cloth that covered their basket of papayas or lettuce or bunched carrots carried in through the night. A butcher hacked away at the carcass of a goat that had the scrawny look of a skinned dog, only recognizable by the cloven feet splayed across the steel cutting table. Underneath, exposed necks of wet, still-feathered chicken corpses leaked blood into pools that drained in thick rivulets down the sidewalk. The scene looked like death.

There was beauty as well, to counter the grim reality of daylight in this grey city. The clerk at the Royal Singi hotel counter. She had none of the round ruddiness of the schoolgirls; instead her face was slimmed by adulthood, with a honey tawniness throughout her cheeks, neck and partially bared shoulders. Her slim nose held a tiny jewel in the side that matched the tikal in her forehead. She asked questions appropriate for a hotel clerk used to catering to foreigners: where are you from, where are you going, how long, why so short, what do you do in Tokyo, when will you come back to Nepal – and I in turn told the bellhop beside us how beautiful she was. She, bolder than I, thanked me directly.

Then the two stewardesses on Ghorka Air as we flew into the Terai. Modest to daring skirt lengths, mascara’d eyes and taut bellies peeking out of sari-styled tops. Each had a slash of red dye in the center part of their hair; alas, they were married. Crouching, they walked the length of a cabin not high enough to stand straight up in, passing out candies to suck and cotton balls to plug into our ears. Their hands were thin, fine like a piano player’s; their nails a dark burgundy.

And the 22-year old mother of two. A shopkeeper in Sauraha on the border of the Royal Chitwan National Park, a tiny, dusty settlement in the southern Terai. She had two rows of clean, even teeth that rivaled the whites of her eyes for brightness. Her youngest sat on the floor in a brown shirt and no bottoms, his own dusky bottom the color of his shirt. Her shop could have been a century old; the shelves were dark rotting wood, the ceiling thatch; the floor uneven concrete. Light came from the open front wall and a three-foot high backdoor her older child stood shyly within. I traded 100-yen bracelets I had brought with me from Tokyo. She had better on her wrist already but liked the newness of my goods, and when she put them on and shook them, her youngest squeaked in excited wonder at the sound they made. She smiled and cooed back at him in her own Nepali baby talk. They mirrored each other’s glee, and I was immediately smitten.

[This article was originally published many years earlier.]